Falconry is defined as the taking of wild quarry in its natural state and habitat by means of a trained raptor. The sport has a long history, some suggest as early as 2000 B.C. For more on the history of falconry, click here.

TO LEARN MORE ABOUT FALCONRY

According to O.C.G.A. ~ 27-2-17, it is unlawful for any person to trap, take, transport, or possess raptors for falconry purposes unless the person first procures, in addition to a valid hunting license, a valid falconry permit as provided in O.C.G.A. ~ 27-2-23.

There are three classes of falconry permits: apprentice, general and master. Prior to the issuance of any falconry permit, applicants are required to successfully complete an exam (administered by the department) relating to the basic biology, care and handling of raptors, literature on raptors, and laws and regulations pertaining to raptors.

In order to become a Falconer, you must score a minimum of 84 points on a Falconry exam consisting of 105 questions. The exam may be taken at the DNR Law Enforcement Division Headquarters - Special Permit Unit with a previous appointment. Please call 770-918-6408.

If you live some distance from Social Circle, it is possible to arrange to take the exam at one of our Region Game Management offices - see link for locations - https://georgiawildlife.com/about/contact

This year’s (2021) process to apply for the Peregrine Falcon season in Georgia will be changing to an online drawing through our Go Outdoors licensing system.  This is the same system where one may purchase normal hunting and fishing licenses as well as where you apply for quota hunts.  If you have purchased a DNR license of any type then you have an account in Go Outdoors.  The application process is as follows:

If you do not see the option of Falcon on the list of available quota hunts please call the Special Permit Unit at 770-918-6408 and ask for Jamie Hawkins or Lt. Mark Patterson.  Remember, in order to apply you must be a Master or a General falconer with at least 5 years of experience.

Falco peregrinus was federally delisted in 1999 and the U.S. Fish and Wildlife Service allowed for the limited take of nestling peregrines in the western U.S. beginning in 2001. More recently, the Fish and Wildlife Service along with the Atlantic, Mississippi and Central Flyway councils approved the limited take of “passage” peregrines in the eastern U.S. These falcons are first-year northern, or Arctic, peregrines that breed in northern Canada and Alaska and southern Greenland, migrate along the eastern coast during the fall, and winter in Central and South America.  The northern population is much larger than the less migratory eastern population found in the eastern U.S.

“Biologically, there’s no reason we can’t do this,” said Jim Ozier, a Wildlife Conservation Section program manager with the Department of Natural Resources’ Wildlife Resources Division. “Falconers are a legitimate, passionate and responsible user group, just as are those who hunt and fish.”

The peregrine remains state-listed as rare in Georgia, primarily to draw attention to the very few pairs that nest here. The combination of allowing trapping during a brief time in the fall and restricting trapping to the coast is designed to avoid capture of resident peregrines that belong to the eastern population, helping ensure the capture only of northern migrant birds en route to South America.

In the U.S., peregrine falcons were listed under the Endangered Species Conservation Act in 1970 after populations hit a DDT-induced low. But peregrines recovered, thanks in part to falconers, who contributed expertise and captive-reared birds.

Peregrine falcons are considered the world’s fastest bird, with dives clocked at more than 200 mph. Falconers prize peregrines for their spectacular hunting skills. 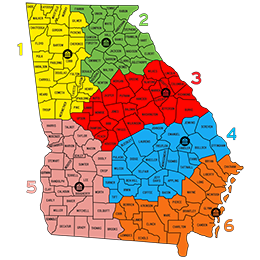